Bankruptcy and the path to total success

It was nice being young. You could do stupid things and get away with it, like dig up your ‘friends’ front lawn and plant them a garden while they were sleeping. Maybe hang some CAUTION tape around town, forming a labyrinth for late night drivers. Or take all of your money and start a record label right after college.

It was this very romantic notion, graduating college and using all that newfound knowledge to go to rock clubs and make posters in the living room. I tried to pitch the idea of starting a label to my friends, but they were all being re-conditioned by The Man to take jobs at banks and software companies. I was crestfallen. So I did what any self respecting artist would do, and moved back in with my parents. I started the label by myself.

My favorite label at the time was The Militia Group and I wanted something equally cool sounding, but I over-thought it and named it American Jealousy. I had no idea what I was doing except I knew I had a good ear for music. At the time I was also moonlighting as a not-quite-yet-failed music video director and I had some good connections in the scene from that. The first band I signed were these group of local kids who hadn’t been playing for a long time but were ‘talking to a bunch of labels.’ I kind of fell for the hype and spent all this money on promo photos and album artwork and tour support. No matter what I budgeted, I ended up spending three times as much. I found out later the tour support money went towards drugs.

Near bankruptcy, I put the rest of my money into this band from Texas called The December Drive. These guys were really talented and Charlie from that band ended up producing Meg & Dia’s “Cocoon” album almost a decade later. I’m really proud of the album we released together and in fact that may be one of my proudest moments ever. Napster had just come out and I saw that recorded music was going to price itself right out of competition, so I had this genius idea to sell albums for $5 and make it up in volume. Turns out kids just thought it meant the music was shitty. We raised prices in line with the industry standard near the end of the album cycle and sales doubled, but it was too late. I was broke.

My one indulgence each year was going to the Warped Tour in Ventura. For $25 you’d get to see all the bands you cared about, maybe get an autograph or two and some pictures. And there I was, defeated and broke but I went anyway. Half way through my best friend and I are starving and pizza slices are $5 or something we clearly can’t afford. Then we notice that behind one of the stages they’re filming some kind of TV show and the crew has full catering, so we literally distract a guard and run through the side gate to get back there. My friend and I, we’re in heaven, eating all this free food and watching this show being taped. I’m stuffing my mouth but trying to act cool and fit in back there, talking to some other woman who is equally as smart as us by hanging back at catering. I kind of half-assedly mention I want to intern for a place like this and she gives me her card, which I stuff in my pocket and forget about for three days.

Im cleaning out my pockets when I find that card again, and just as Im about to toss it, I figure I may as well look her up online. So I jump on AltaVista and type in her name, and it turns out she manages The Smashing Pumpkins and Nirvana. Well, fuck me. I call her up that second and tell her about my label and she invites me in that same day. I drive the 90 minutes to her office and she hires me on the spot. Turns out they’re begging for interns. I had no idea at the time, but most places want free labor and are willing to put dipshits like myself to work for free. 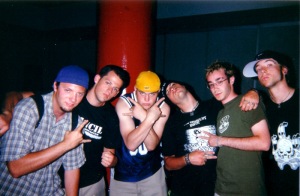 Me and my best friend bugged the shit out of Good Charlotte until they agreed to take this photo with us. Can you tell?

The rest, as they say, is history. Kind of. I thought I had struck easy gold, but my Big Break as an intern ended up being a disaster although it definitely got me started down the right path. Everyone there really admired my spirit and respected the fact I was out signing bands. Starting that record label cost me all my money, but it was an investment into my career as an entrepreneur. I could have spent that money at grad school on Music Business courses but it was so much more effective going towards real-life sales and marketing, because I was the guy working my ass off to get even 60 CDs into stores, and begging Skratch Magazine to write a 4 line review of my album. I don’t think there’s any way to learn the music industry other than going out there and trying to make things happen.

A few years later my friends with their bank jobs and software programs would call me and tell me their big regret in life was not starting that record label with me. They were still at the same jobs doing the same things and I shared in their regret. I would have liked a partner back then while I was going bankrupt.